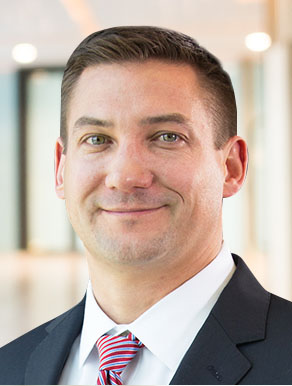 Prior to MPP, he has worked with firms of all sizes.  Jon began his legal career as a Judge Advocate General’s (JAG) Corps attorney in the United States Army where he was promoted to his final rank of Major.  After completing an honorable military service commitment, he returned to Texas having honed his legal skills practicing nearly every aspect of the law as a prosecutor representing the United States of America.

A North Texas native, Jon grew up in Dallas and attended Highland Park High School.  He graduated from Texas A&M University and was a member of the Corps of Cadets, where he originally joined the U.S. Army following 9/11 and commissioned as a Military Intelligence Officer. During a time of war, Jon was one of six individuals in the nation granted an educational deferment by the U.S. Army.  He used that deferment to pursue an opportunity to attend Southern Methodist University’s Dedman School of Law and was accepted into the JAG Corps.

Prior to graduating law school, Marshall was awarded multiple prized summer associate positions and was selected for a White House Internship under the President George W. Bush administration.  Jon returned to the U.S. Army in 2010 to serve as a Presidentially appointed attorney in the JAG Corps.  The JAG Corps reigns as the oldest law firm in the United States and remains one of the largest law firms in the world.

With over a decade in the JAG Corps, Marshall built a reputation as a skilled and formidable trial lawyer.  As a military prosecutor, he fully prosecuted more than 25 felony-level federal criminal prosecutions and conducted hundreds of administrative hearings.  He is respected by his colleagues in the JAG Corps and never lost a case as the first chair attorney.  Throughout his military legal career, Marshall has had the opportunity to practice many types of law, including: civil litigation, criminal litigation, labor and employment law, administrative law, international law, operational law, intelligence law, and contract law.  Marshall was regularly ranked as the #1 attorney among his peers and supervisors alike.

During his time as a civil and administrative attorney, he represented the United States as the labor and employment law counselor defending against Title VII, ADA, and FML complaints from federal civilian employees at administrative MSPB and EEOC hearings, arbitrations, and mediations. Marshall served as a military magistrate responsible for the review of continued pretrial confinement and the issuance of search, seizure, and apprehension warrant authorizations.  Marshall has maintained his top-secret clearance since 2011 and has used this status to serve as an international and operational law attorney advising on highly classified special operation forces missions in Afghanistan and multiple other countries.  Advising on hundreds of real-time combat operations and completion of the U.S. Army’s Ranger school has uniquely trained him to develop calculated solutions to some of the world’s most difficult problems.

We have worked with Jonathan Marshall for several years. He is always quick, honest and helpful. We have been impressed with his ability to negotiate and settle disputes. This is why when we learned that Jonathan opened up his own firm with his partners Presley and Pipal, we decided to move with him. He is a huge asset to our company.